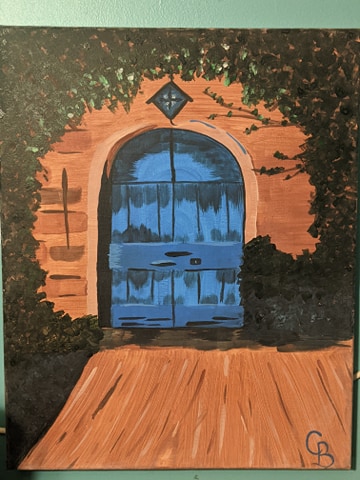 A few minutes ago I was working on a story called Whisper. I’m nearly done with it. It’s the first story I’ve written in a long time where I didn’t put a lot of pressure on myself to write it and make it publishable. More on that, maybe not today, but later.

Cate walked into the room with the smile on her face that is usually reserved for when she is creating. Tonight she is baking cookies. Not just any cookies, but her sugar cookies that she will ice with the royal icing. They are delicious.

“Hey,” I said and turned away from the computer. I put my feet on the bed and watched as she dug through a rolling unit of drawers for the right cookie cutter. She found the one she wanted, closed the drawer and looked at me.

She went to the door, turned and looked at me. “I have to get them cut,” she said. I guess she thought I wanted to talk or to get her attention. I didn’t. I just like seeing her that way.

I just smiled again. In return, she smiled, then walked out of the room, closing the door behind her.

I turned to the laptop and stared at the last few sentences I had written.

I saved the document, then closed it. I spun in the chair and put my feet back on the bed, crossing them at the ankles. I stared at a tie dyed sheet hanging on the wall. It’s something Cate made. I turned and looked at the wall where my desk is. It is lined with pages from a book—Cate wallpapered the wall with a copy of King’s The Stand. On my desk is a replica of the Stoker Award that Cate made me one year when I thought one of my stories was a shoe-in for a nomination and I was sad that it hadn’t received one. We did a Not at the Stoker’s Award show the same night as the Stoker’s event. She called it the Bram Stokeher award. The shirt I currently wear is one she made for my last birthday. On it are the words Who Knew 50 Could Look This Good! On the wall next to the television that sits on our dresser is a painting she did of a door in a garden.

All around me are the things that make my wife happy. When she is creating anything she is the happiest person alive. Her mind is thinking, her hands are working, her eyes have that determined look in them. That’s her happy place.

How can I not smile at such happiness and joy.

Until we meet again, my friends, be kind to one another.

A few years ago, when I was younger, dumber and somewhat meaner, I worked at a job I enjoyed, though I didn’t care much for my employers and their greedy ways. The hours had been packed on quite often and on one particular summer evening I was tired and heading to my car, which was a good three blocks from my office. My feet felt heavy, my back ached and I had that inescapable feeling of exhaustion coursing through my body. You know that feeling, right? Where your legs and arms are weak, where you feel like every breath is an effort, where all you want to do is to lay your head on a pillow and sleep for a month. Where a gallon of water wouldn’t quench the thirst or the parched throat. Yeah, that’s the way I felt.

It so happens that I was halfway to my car and had just crossed over Washington Street (which means nothing for those of you who don’t know the layout of downtown Columbia, South Carolina. For those who do, I was on Sumter Street and heading away from the capital building.) I was almost to the Subway on my left when I looked up.

Coming toward me was a little old lady. When I say little, I mean maybe around five feet tall. She had that white/blue hair combo working and she was slightly hunched over. She wore a flower print dress and knee high blue socks.

Our eyes met and she stopped. Yes, stopped. There was a moment where I guess I could have stopped as well and we could have had a good old western stare down. But, as I said earlier, I was tired and all I wanted was to get to my car and get home. Then the woman did something I hadn’t expected. She turned to her left and started across Sumter Street.

At a little after eight in the evening in Columbia there is still significant traffic. This woman didn’t bother looking in either direction. Her momma would have been very upset with her over this. Remember, always look both ways before crossing the street. That’s a tip from your Uncle Herbie. The woman beelined it all the way across four lanes of traffic and glanced back at me after she reached the other side.

I told my wife about this later that evening as we were crawling into bed.

“You never smile,” she said.

We both laughed about it, but she was right.

I’m not a smiler. Never have been.

The Punisher, Frank Castle said, ‘I don’t smile much. Don’t smile ever.’

My wife used to say I should smile more. Hmm… I always thought I looked like Wednesday Addams when she smiled.

Over the last few weeks, I’ve come to realize that when I smile it really does give some folks concern.

“Are you feeling okay?”

As I was saying. Apparently I smile so infrequently that when I do, it gives people pause, it alarms them to something possibly being amiss. I would like to refute the rumors that say if I am smiling I am up to no good. Though it’s possible that could have been true at one time or other, it is not necessarily so now.

I’ve been smiling more lately, and with good reason. If you’re not sure why, then just scroll back a couple of weeks’ worth of posts and you’ll understand.

I am at peace with myself and I’ve noticed there have been more smiles across this ugly mug of mine than in a long, long time. I’ve also noticed that when I smile my attitude is brighter, my mindset is calmer. It puts me in a better mood.

Hmmm… will you look at the last three paragraphs? They all start with a variation of ‘I.’ Thank goodness this isn’t a story I want to sell.

It’s been said that smiling is good for the soul, good for the heart. I think whoever said that was right. Maybe it’s an old wives tale. If so, the old wife that came up with it hit the nail on the head.

I’ve never been a smiler. I think I said that already. But there has been one planted on my face a lot more these days. Lately, when I find myself in not such a good mood, I smile. It doesn’t always work right away, but it does help ease the aggravation inside.

How about some Bad English?

I’ve always hated this song. I think the only part I like about it is the keyboard. Other than that, the end of it is my favorite part. However, it’s about smiling, so why not?

Ahhh, but let me add to this with another video. It’s not music, but a small movie titled, you guessed it, SMILE, by Yuval Markovich. It’s kind of creepy and you all know how I enjoy the creepy stuff. It makes me SMILE.

Be forewarned: there is a lot of language in the subtitles.

I really have no way to end this today, nothing profound to say other than try smiling every once in a while. You’d be amazed at the difference in how people look at you and how you feel inside.

Until we meet again, my friends…