There is  a dirt road off of Highway 176 in South Carolina. Like many dirt roads around the country, if you blink you might pass it without realizing it exists. That almost happened to us on Friday as we drove along in search of old cemeteries. If not for Cate’s eagle eyes, we would have never seen the road, and we would have never came across the Tabernacle Cemetery just outside of Cameron.

We backtracked and turned down the dirt road that didn’t look to really be off the beaten path. It was littered with small branches and leaves that scraped along the car’s undercarriage as we drove along. We stopped about halfway down the dirt road. A large tree branch lay in the way, most of it shattered into pieces. There was no moving the core of the branch, so we parked and walked the rest of the way.

It only took five or so minutes to reach the cemetery off to our left. Before reaching it, three more deer appeared in the distance, just on the edge of the woods where the road dead-ended.

The cemetery wasn’t quite shrouded by trees and shrubbery, but there was plenty of overgrowth and broken branches. There was a tree down about fifty yards from the road, probably felled by Hurricane Matthew, a storm that skirted the edge of South Carolina, but had the reach of winds and rains that spread beyond the Midlands, some hundred plus miles from the coast. 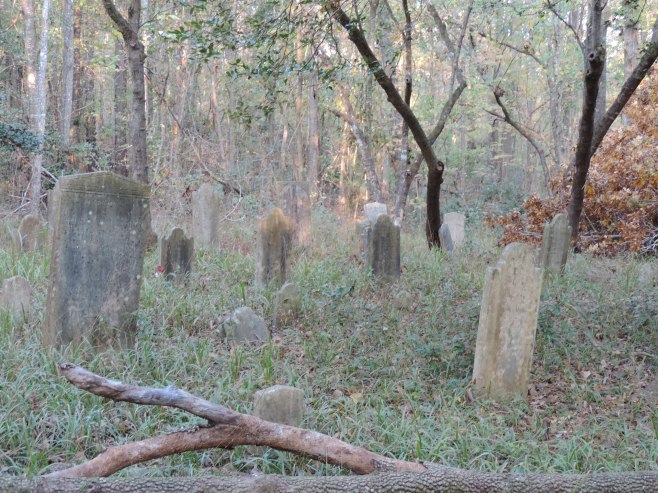 The graves, most of which dated to the early to mid-1800’s, felt as if they had been forgotten over the years. The grass was shin high in places and leaves crunched under foot. Like the road, there were small branches everywhere. Tomb stones leaned forward; others had crumbled over time. A few had broken in half. Many of the graves belonged to Confederate soldiers or to the Dantzler clan…or both. There were some smaller headstones, babies and children who passed much too young.

As we wondered around the open cemetery (which I imagine was last kept up about six years or so ago), the sounds of Mother Nature spoke to us. A wind whistled softly through the trees, leaves rustled and fell all around us in ballet pirouettes, deer walked or ran through the woods not far from us. Out in that grave yard, all those sounds gave the place a somewhat creepy atmosphere.

We had seen the large tree from the road, many of its branches b
roken off and scattered about. As we approached it, high-stepping tall grass and other branches, we saw that none of the tombstones along its length had been damage 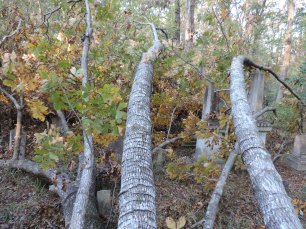 d when it fell. It was as if the tree had laid down right between several headstones for a little rest. It was like the tree had a respect for the dead that
most of the living
don’t have.

Where the top of the tree lay were three larger markers, Confederate soldiers, an
d Dantzlers alike. The branches hung above them and around them. Some of them brushed up against the markers, as if patting them gently. It was one of the neatest sights we have seen in an old cemetery.

As we left and headed back up the dirt road to where our car sat (waiting patiently for us, perhaps?), I stopped and looked back. The scene before me was eerily quiet. The wind no longer whistled through the trees. The leaves no longer rustled and fell to the ground in ballet-like pirouettes. The deer had left the area or had just stopped moving about. Could they sense something about to happen?

Now, here is what I want you to picture, and no, this did not happen. But this is where my mind painted a picture o

f three men, all Confederate soldiers in their winter coats and britches. One wore a gray hat and sat on the long trunk of the tree, one foot on the ground, the other firmly planted on the tree, knee bent and his elbow on it. He bit into an apple, that in my mind’s eye, looked too red. I heard the crunch of his teeth sink into the apple.

The second guy was older, a salt and pepper beard on his face, a wooden pipe in his mouth. White smoke billowed up from the pipe. He stood on the other side of the tree, sharpening a knife on a wet stone. In the picture being painted in my mind I sniffed the air, thinking I might be able to catch the rich smell of the tobacco, but couldn’t. I can’t say there wasn’t disappointment on the face of my mind’s version of me.

The third soldier—the one that felt the most real to me—was kneeling down a few feet from the base of the fallen tree. There was a white bandage around his midsection in place of the shirt he wasn’t wearing. He reached into the ground, his hands clearly disappearing into the dirt of the grave where a small headstone was. A moment later he stood, a baby in his arms. He turned to me and our eyes met. He was smiling as he snuggled the baby against his chest.

I stood for a few seconds, watching these three men, one eating an apple, one sharpening a knife and one holding a baby. Then they faded away, leaving just the graves and woods behind. And just like that, my mind released me from the image.

I stood a couple of seconds more, and then ran up the road to catch up with Cate. We would leave the grave yard behind. Maybe someone else will come along and the ghosts will plant images in their mind. Or, maybe, it’s the other way around. Maybe their minds will plant images on their surroundings and bring the ghosts alive, if only for a few seconds…