Nobody noticed when Pop Callahan disappeared. At least not until Maggie Sue came calling and he didn’t answer the door.

Maggie Sue lived down the road in a dilapidated singlewide trailer with streaks of rust running along its sides. She was a trashy little woman who thought an unbuttoned blouse and a pile of makeup was attractive. On that day the extra thick blush and eye shadow did little to conceal the shiner she had been given a few days earlier.

Cassidy answered the door on the third knock. Her golden hair was dirty and pulled back into pigtails. She had chocolate smeared on one side of her ten-year-old face and her pink dress was caked with dirt and spaghetti sauce—the lone staple in the Callahan house.

“Hey, Cassidy,” Maggie Sue said with a fake smile and a finger twirling in a lock of dirty blond hair. “Is Pop home?”

“No,” Cassidy responded. If there was one person in the neighborhood she disliked, it was Maggie Sue.

Maggie Sue gave a slight nod. “Can you tell him to come visit me when he gets home?” 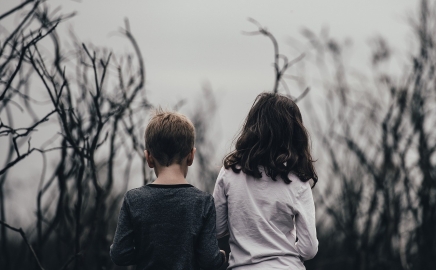 Anger flared on Maggie Sue’s face in the form of creased brows and turned down lips. A storm brewed in her blue eyes. When she spoke again, her voice was less pleasant and held a demanding tone. “It would be nice if you would do that for me. Can you remember that, retard?”

Cassidy took a deep breath and held it. She forced back the words she wanted to say, then shrugged again. “I guess so.”

Maggie Sue made it down the first couple of steps before Cassidy spoke again.

“Hey, lady, you wanna visit my graveyard?” A small grin traced across her lips.

Cassidy was known in Briar’s Ridge as a little off-center, special in the most special of ways. Questions like that were normal for her. But for Maggie Sue and her suddenly wide eyes and O-shaped mouth, it had sounded bizarre, even coming from Cassidy, the waif of a girl Pop had taken in when she was three, along with her little brother Ollie—short for Oliver, Cassidy told anyone who would listen. Truth be told, Callahan didn’t so much take them in as he took them from a prostitute who owed him money. The plan was to return the children when he was paid. The woman, a drug-addled whore named Harriett, died a few days later, killed by a john or maybe even herself. When the cleaning lady at the local ho-tel no-tel found Harriett swinging from a light fixture, her face blackened and one eye dangling from the socket, Callahan was stuck.

Maggie Sue stared up at Cassidy from the bottom step. She cocked her head to one side, shook it slowly, as if doing so helped her make a decision. “I don’t think so, little girl.” She stepped off the final step. “Let Pop know I came by, okay?”

Cassidy gave a half-hearted shrug, barely raised a hand to chest level and waved once before dropping it. She closed the door and rolled her eyes.

“When Pop gets home. Whatever.”

Two days passed before Maggie Sue returned. Cassidy considered making her knock for a while, but answered on the fifth rap.

Cassidy stood in the doorway, the same pink dress on, the chocolate smears gone from her face, replaced by a red Kool-Aid moustache. Her blond hair was no longer in pigtails. A clump of hair on the left side of her head looked as if it was tangled in a broken rubber band.

Maggie Sue’s shiner had gone from purple and black to an ugly green and brown. Her hands shook and her eyes darted about, as if someone followed her.

Cassidy gave a shrug, a maybe/maybe not gesture.

“Well, is he, little retard girl?”

Maggie Sue shifted her weight from one foot to the other. “When did yah last see him?”

Cassidy put one finger to her chin, the nail thick with dirt beneath it. “When did he give you the colored eye?”

Even through the heavy make-up, Cassidy saw the red blossoms form on Maggie Sue’s face. The woman said nothing at first, only stared at her shoes. When she turned her eyes back to Cassidy, they were rimmed with tears.

“That would have been Sunday.”

Cassidy nodded. “Then Sunday it was.”

“So, he hasn’t been back since Sunday?”

“You said you haven’t seen him since—”

“I haven’t seen him. That doesn’t mean he hasn’t been here.” Cassidy rolled her eyes.

“Where do you think he went and ran off to?”

“Why wouldn’t it matter?”

They stared at each other until Maggie Sue wavered and looked back toward the red clay road that ran past Pop’s rundown shack and into town where the rest of the houses were as decrepit as the trailer she lived in.

“Just tell Pop I came by. I need to see him. Really bad.”

“I’m sure,” Cassidy said and closed the door. She opened it to see Maggie Sue still standing on the porch, her eyes still searching, but probably not really seeing anything at all. Maggie Sue ran a brittle-nailed finger up one arm, drawing pink lines on her near white skin. “Hey, lady,” Cassidy said, snapping her from her thoughts.

“You wanna visit my graveyard?”

“Umm …  no.” Maggie backed away, almost fell off the steps when her foot slid from the porch landing. “I gotta go.”

Cassidy closed the door and looked at Ollie. He stood just inside, his back against the wall. “She’ll be back,” Cassidy said.

Maggie Sue did come back. The next day. Her eyes held gray and purple bags beneath them and she hugged herself with both arms as if she were cold. Her blond hair was a tangle of knots and her lips were chapped and bordering on white.

Cassidy stood at the door, listening to the many knocks, a smile on her face. “Should we make her come back later, Ollie?”

Ollie stood by the wall. A frown creased his seven-year-old face. He shook his head quickly.

Maggie Sue’s voice shook when she spoke and it came out as a whine. “Has Pop come home yet?”

“You look like crap,” Cassidy said, ignoring the question.

“Shut up, retard. I need to see Pop.” Her eyes were larger than Cassidy recalled them being. She dug her nails into her arms, leaving red crescent moons in their wake.

“You wanna visit my graveyard?”

Maggie Sue’s shoulders sagged, then she stood straight. Her eyes became narrow and her nostrils flared as she took a deep breath. “What is it with you, kid?” she yelled. “Why do you want me to see a graveyard so bad? What would you have in it anyway? Did you bury your kitty cat or something? Maybe a pet goldfish or a dog?”

“Oh, I know. I bet you have a collection of dead bugs back there. Each one with their own little graves and markers? Is that it? You’re not a regular retard, are you? You’re some sort of sick-o retard, right? Huh? Is that it?”

Cassidy stepped back from the entryway and turned around. She walked down the short hall, leaving the door open. “If you want to see Pop, he’s this way.”

Cassidy stopped in the hall, looked back, her eyes slits on her dirty face. “Ollie,” she said and gave a nod.

“Ollie?” Maggie Sue asked. One side of her top lip lifted up in confusion.

The clang of a shovel on the back of Maggie Sue’s head sent her forward, her hands out in front of her as she crashed to the floor. Cassidy leaned down. “I’m not a retard, whore.”

They waited patiently for Maggie Sue to wake up. When she did, Ollie was smiling, his teeth brown and rotting. They had bound Maggie Sue’s arms and legs to a wooden kitchen chair. Duct tape covered her mouth.

“Ahh, you’re awake,” Cassidy said. “Now, are you ready to see my graveyard? It don’t matter none. We’ll show you anyway. Okay? So you know, this is a regular tour, not a grand tour. A grand tour is where you get to touch the things in the graveyard, maybe even be allowed to dig up one of the things buried here. But this isn’t a grand tour.”

Maggie Sue’s eyes grew wide as Cassidy waved her arm behind her. “Welcome to the Cassidy and Owen Cemetery for Almost Dead Things.”

The yard was littered with small markers made of boards and plastic and bricks placed at the heads of mounds of dirt.

“Over here we have Pippy.” She glared back at Maggie Sue. “Yes, my kitty is buried here.” She turned back to the graveyard, waved a hand past Pippy’s grave. “Over there is where I buried the head of Bruce, the dog that killed Pippy. Beside his head are his legs.”

She continued on, waving a hand like a game-show girl showing off the next prize if the price was right. “Around the small azalea bush are the remains of birds that have fallen out of trees or that were killed by Pippy. That one,” she pointed to a small headstone painted blue, “is where Barney is buried. He was a duck.

“I guess you really didn’t come here to see the animals, right? You wanted to see Pop.  Well, there’s one of his hands.”

Ollie stepped over to a fresh grave, a paper plate with a stick pushed through, marking it. On the plate was a crude drawing of a hand in red crayon.

“His other hand is over there. And one of his legs is by the fence over yonder.”

Maggie’s scream was muffled behind the tape, a sound caught in her throat, forever to remain there.

“Over there is his upper body, and right there, right in the center of the Pop Callahan Memorial section of our graveyard, is his head.”

Cassidy’s eyes narrowed. She walked over to Maggie Sue, grabbed her face with both of her small hands. “Did you know Pop called me a retard? I betcha didn’t know that, did ya? That was right before he hit me for the last time. I reckon he wasn’t done when he beat you up, so he came home and started on me.”

Maggie Sue grew quiet, her eyes big, the blue showing in the mass of white around them.

“I betcha didn’t know he called Ollie a dumb retard all the time. And all ’cause Ollie can’t talk.”

Cassidy stepped away and motioned for Ollie. He came into Maggie Sue’s view. In his hand was a hatchet—one really too small for a man to use, but just the right size for a small child.

“I betcha didn’t know I hate being called a retard, did ya? You know what else?” She paused, waiting for any sort of reply. “Ollie really hates it when someone calls me that.  Don’tcha, Ollie?”

The little boy smiled, brushed aside a heavy lock of dirty brown hair. He gave a nod.

“I’ll dig the holes,” Cassidy said and turned back to Maggie Sue. “Welcome to the Cassidy and Owen Cemetery for Almost Dead Things. I hope yah enjoy your stay.”

She turned away, grabbed the shovel from beside the house. When she looked back, Ollie was bringing the hatchet down onto Maggie Sue’s right foot.

(Cassidy and Owen’s Cemetery For Almost Dead Things originally appeared in the short story collection, Southern Bones, which you can find here. Or you can get the print copy of Southern Bones directly from me by sending me an email at 1horrorwithheart@gmail.com)