“Nothing but a ghost,” Bobby said as he looked from the ground where rails were covered in mud and weeds to the rusted out locomotive jutting out of the water.

“It’s a steam engine,” Hannah said and wiped her nose with the back of her hand. She wiped snot on her pants, sniffled and dug both hands into her pockets. She didn’t care much for most boy clothes—she wore hand me downs she got from her older brother, Tucker, and hated them—but she liked those pants. The pockets were deep and she could stick her hands all the way in (unlike all of the ‘girl’ jeans her friends had).

“I am looking at it. It’s nothing but a rusty locomotive.”

“Yeah, I guess so, Hannah. By the way do you know what a locomotive is?” 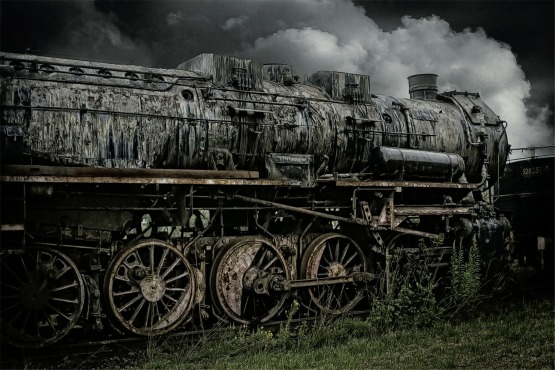 Hannah rolled her big hazel eyes, not trying to hide it from Bobby. “It’s a train.”

Again, she rolled her eyes and shook her head to go along with it. Hannah stepped into the muddy water. Her shoes and ankles were suddenly cold, but she wouldn’t turn around. No, once she got something in her head, she followed through and she aimed to get a better look at the train in front of them.

“What are yah doing, Hannah?”

A few steps in and her right foot slid, almost sending her to the muck she now waded in. She corrected, regained her balance and looked back.

“Yah trying to take a spill?” Bobby asked with a snicker. “Yah almost went face first right into the river.”

“But I didn’t, so stop your laughing.”

Hannah put her arms out at her sides and waded through the deepening water. She reached the front of the engine and put one of her hands on it. The heavy rust that covered it felt like chalky nubs of glass, not quite sharp enough to slice skin if she was careful, but if she wasn’t, oh the gashes it could cause. She put one foot onto the side rod. Water fell from her pants and sloshed out of her shoe as she reached up, grabbed hold of another rod and pulled herself up and out of the river.

“Yah see anything?” Bobby called from the bank.

“Hold your horses and let me look.”

She shook her head, a little in disgust, a little in annoyance. Bobby was two years older and about six inches taller, but a hundred percent more chicken than she had ever been. Yup, his yellow streak ran from the back of his skull all the way down to his oversized tailbone.

Hannah eased along the rod, and slid her hand on the side of the locomotive until she reached the cab. She leaned just enough to peak inside the open window. Sludge and weeds covered what she could see of the floor. There was a bench seat, rusted and corroded springs jutting from the ruined upholstery. Sitting on the bench were the skeletal remains of the engineer. Though his clothes were mostly tattered rags, a striped  conductor’s hat still remained on his fleshless skull.

She stared, her eyes big, her mouth open. Then the skeleton moved, its head shifting on its boney shoulders. It seemed to look at her with its blackened sockets and its forever grin. Hannah’s hands slid away from the locomotive, her left foot slipped from the rod and she tumbled backward. A second later, she landed in the brown water of a river that was once a lake and that one day, maybe even one day soon, would be a pond, then a stream, then nothing but a memory. She went under the surface for a moment, then popped up, took a deep breath and gathered her legs under her.

Hannah stood, looked at the locomotive for another five seconds, then she turned back toward the bank. She said nothing until she reached a very dry Bobby.

“Nothing but a ghost,” she said and walked by him, water dripping from her clothes, her feet sloshing in her shoes.

4 thoughts on “Nothing But A Ghost–Free Fiction Friday”