Marcy stood over Tim’s body shortly after his death. The gun in her hand felt too large. The tears spilling down her face felt too few. The shards of her broken heart tinkling onto the floor of her soul felt too quiet. The two scene act of his death felt too unreal, as if the world had forgotten there were still people living, surviving.

Everything … After they had left their home, running away like scared rats on a sinking ship. After the world had cornered them and after he had put bullets in the heads of all three of his children to keep them from turning on him. After ending the existence of so many people. At first she tried to remember the amount, but even that got to be too daunting in a world where they couldn’t trust anyone, not even their own loved ones.

He had begged, and Marcy hated herself for not being able to help him.

I let him die, she thought as she looked down at him. He lay on the floor in the garage of a small abandoned house, a jacket beneath his head like a pillow. The stubble on his face seemed amplified as the color slowly drained from his cheeks. The bags under his eyes looked bruised. His hands still clutched at the wound in his side, the wound that ultimately doomed him to death. Blood had seeped through his fingers and she couldn’t help but stare at it, at how bright the red was.

There was no car in the garage, but there were tools on one wall, hanging from pegs on a long board. She noted the axe, something she knew she would have to use at some point, and the shovel. Yeah, another tool she needed to use, sooner rather than later. Until that time came, she backed away from Tim’s body, her eyes fixed on him as if she was afraid of him. Truthfully, she was.

Marcy tucked the gun in her waistband and searched the garage. Other than the tools on the wall, there were several boxes filled with items the previous owners wished to keep or give to charity at some point, but never got around to doing it.

Isn’t that the way it is? she thought. You make plans and think there is always time to do it, then you never get around to it. Time just … runs out.

Her shoulders slumped and tears formed in her eyes. Marcy wiped at them with the ball of one hand and looked back to Tim.

Still dead. What else would he be?

Next to the wall where the tools hung, sat a cinder block. She walked over and sat down. It wasn’t all that comfortable, but she didn’t think she would be there much longer. If anything, just getting off her feet for a few minutes before she …

Marcy shook her head. She didn’t want to think about the task at hand. The death of her kids was hard enough. Burying them almost killed her. But …

The tears came in a tidal surge that shook her shoulders and rocked her back on the cinder block. She put her face in her hands and wept. Marcy wiped her eyes, blew her nose on the front of her shirt and looked at Tim through wet, blurry eyes. She was tired, so very tired, not just of running, but everything.

I could end it all, now, she thought and touched the butt of the gun still in her waistband.

She frowned, wiped her eyes again, and sniffled back a runner of snot. She swallowed hard when she saw his foot twitch.

Marcy stood, her nerves suddenly dancing. Her heart sped up. She was no longer tired. Though she knew what was coming and she knew what needed to be done, she was scared, not of the deed, but of what would happen if she didn’t follow through, if she didn’t do the one thing Tim asked her—begged her—to do.

Please, he had said, his eyes leaking tears, the shine fading from them even before he died.

Don’t make me do this, she said. She shook her head from side to side. I don’t know if I can.

Please. I did the kids so you wouldn’t have to. I took care of you the best I could, Marcy.

She couldn’t say yes to him. She only nodded several times as she looked down at the gaping wound in his side. With that act, Tim rested his head on his coat and closed his eyes. He breathed his last and was gone.

Now she stood, not quite over him like she had when he died, her finger on the trigger, the gun pointed at Tim’s forehead. She didn’t pull the trigger then and wished she had.

Please. His neck jerked, making his head move sharply to the side.

Please. The twitch of the foot became a tap tap on the floor, as if an electrical jolt had been sent through his body.

Please. His elbow struck the floor. His fingers bunched into a fist. Released.

Please. A sound, like a groan mixed with a growl, came from Tim.

Please. His eyes opened. They were still green, but dull, with no life in them at all.

His hands went to the floor and pushed up. Though he struggled to do so, Tim managed to sit up. His head lulled on his shoulder as if he were drunk. He swayed from side to side, unsteady after being dead for less than twenty minutes.

“No,” Marcy said. The tears fell down her face again. She pulled the gun from her waistband and pointed it at him. She shook her head as he started to stand. “No. No. No.”

Please. Tim stood. He staggered backward and bumped the wall. Then he moved forward, a moan in his throat, his mouth open.

Please. Tim reached a hand out to her. His legs didn’t seem to work right. He stumbled forward. The moan grew louder. 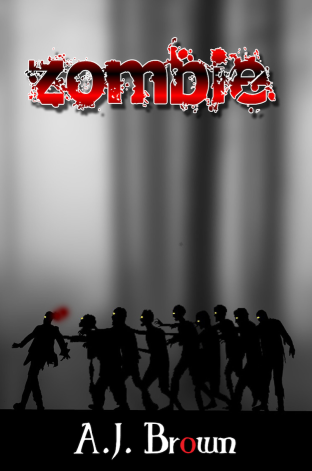 “Please,” Marcy said. She didn’t want to shoot him, not her husband, not like he did their children. But he had turned. Tim didn’t let his kids turn. Once death claimed them, he put a bullet in their heads. Marcy hadn’t done the same for her husband, the man she loved, the man she thought would be with her forever. He had died. The biter that attacked him took a sizable piece of flesh from his stomach and the virus took him quicker than it had the children.

Please, he had begged before he died. Now it was her turn to say please over and over as he approached her. Tim was still several feet away, staggering, growling and gnashing his teeth.

“Please.” The sound of the gun as she pulled the trigger deafened her for several seconds. She staggered back with the recoil. As Tim fell backward from the gunshot to the head, Marcy did the same from tripping over the cinder block she had been sitting on. She landed on her side on the concrete floor. A sliver of pain ran from her hip into her thigh.

From where she lay on the floor, Marcy saw Tim less than ten feet from her. The hole in his head wasn’t a neat circle, but a crater that took out the top left part of his skull. Marcy dropped the gun beside her and stared off at the shadows on the dark ceiling above her. As she lay there, she cried and said the same word over and over. “Please.”

(You can find “Please,” and ten other short stories in the collection, Zombies. You can pick  this collection up HERE.)

4 thoughts on “Please … A Short Story”